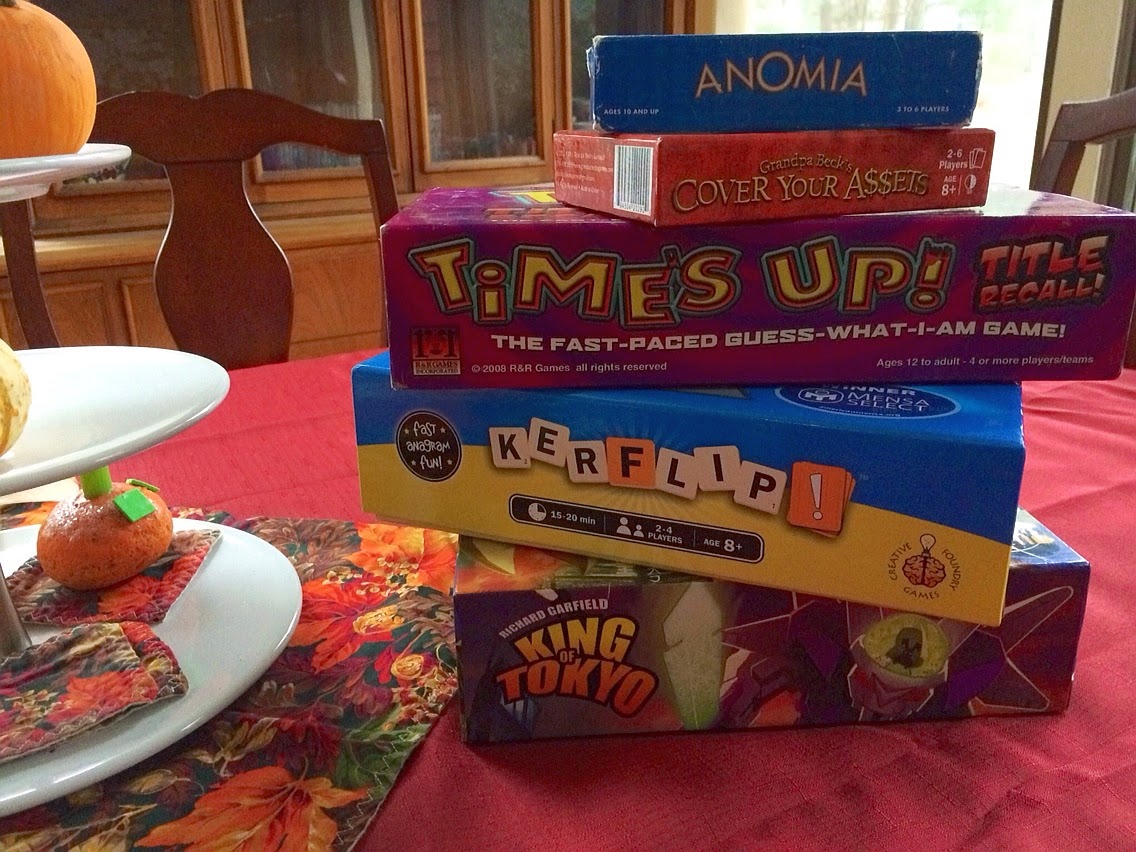 Whether it is a battered copy of scrabble or a shiny new copy of Kings of New York, homes all over the country will be pulling out their favorite games to play this holiday season.  Here is a rundown of my family's top 10 holiday board and card games.

But before we start, I need to share the story of the mandatory Monopoly game.

Ever since I met my husband back in 1995 I have had a front row seat to this family tradition.  It all started when he and his siblings were younger.  Every Christmas his family would pull out monopoly and play after Christmas Eve dinner.  Now, this was not a simple game of Monopoly, this was a cutthroat, no mercy game of Monopoly.  We're talking no free parking, no quitting, and if the next person rolls the dice before you say pay me, you don't get paid.  It is quite the sight to see.  In fact, my husband's youngest sister was banned from playing for several years due to the no whining or quitting rule!  The first few years I played as a team with my husband, but before long I was right there in the mix with everyone else.
laughing, trying to pass the dice before I had to pay, and getting in arguments over properties.  While Monopoly is definitely not one of our families favorite games, this tradition has kept us bringing it out year after year.  It's not always the games you choose to play, but the memories they make that are important.  So, Every Thanksgiving and Christmas it continues to be MANDATORY to play a game of Monopoly.

We have many, many games we love to play, but this list is comprised of the games that make it year after year to our holiday table.  Enjoy! 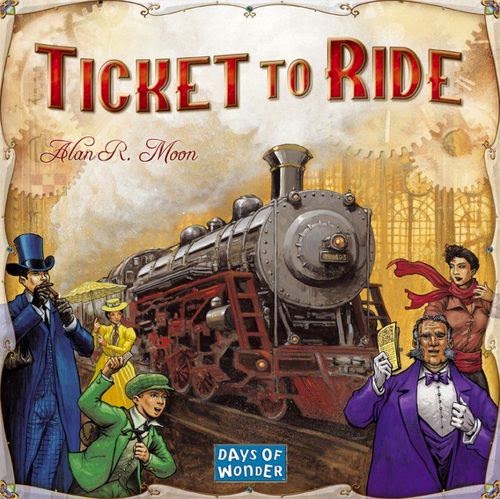 Since its release in 2004, this board game has made it to our holiday table year after year.  In fact, we played it so much the first year, that we took a break from it the following year before bringing it back to the table :) Ticket to Ride is a great game for a wide range of ages.  It has simple rules that can be taught in about 15 minutes making it a fantastic game to teach the whole family.  Players compete to build routes and earn points.  The longer the route, the more points you'll earn!  There are a wide variety of versions to choose from including, Ticket to ride: Europe, Ticket to Ride: Marklin, Ticket to Ride: Nordic Countries, and the Ticket to Ride Card Game.  Any would be a great addition to your collection. 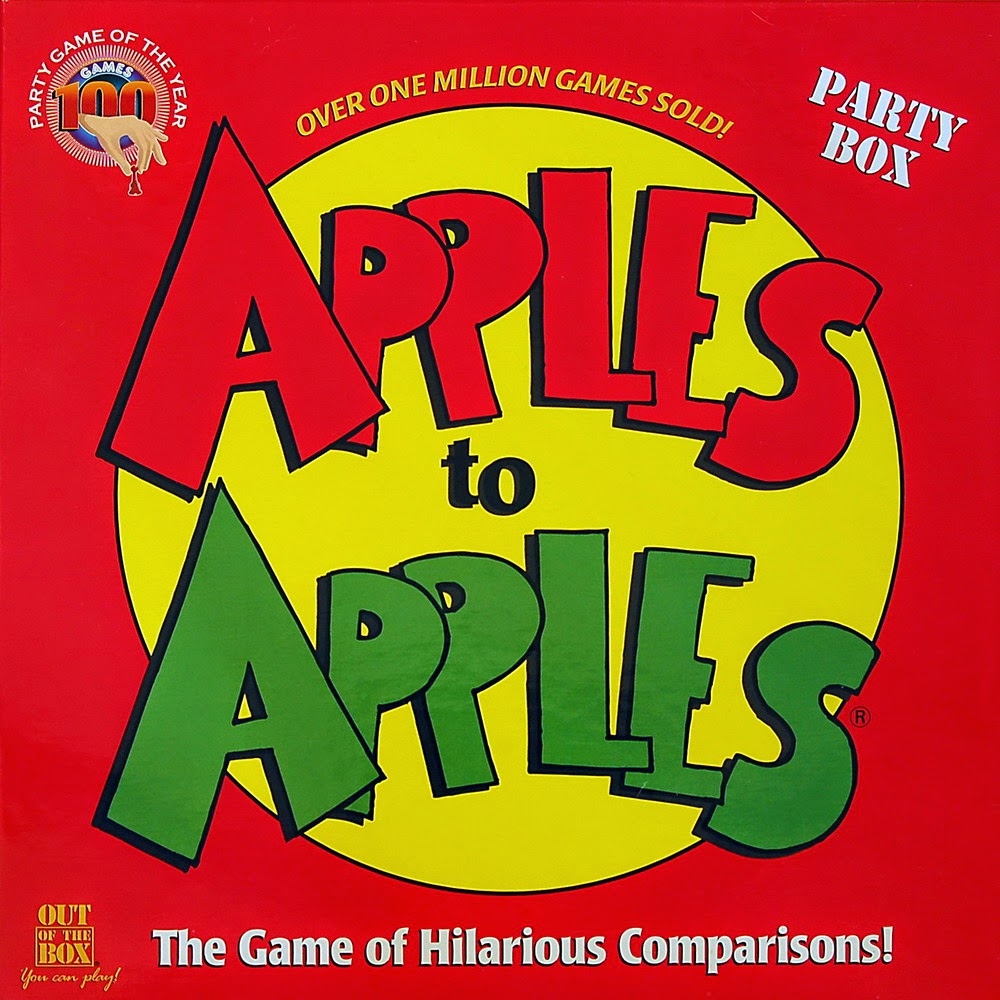 9: Apples to Apples
Who ever thought a box of cards with nouns and adjectives could be so much fun!  This game has kept us laughing over the years and it's an easy game to grab whenever we need a quick filler.  We usually don't even play to win, we'll just play until we're done laughing!  The game is super simple.  Everyone has a hand of nouns.  The judge flips an adjective and reads it to the group.  Then players rush to put down the card that best matches the adjective. Laughing ensues.  That's it!  If you are looking for something slightly different, or more grown up you might also want to try Cards Against Humanity or The Princess Bride: Prepare to Die! 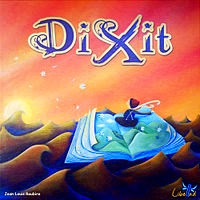 8: Dixit
This game has some of the most beautifully illustrated cards I have seen in a game.  In the game, the story-teller must come up with a phrase to describe one of the illustrated cards.  Then the other players chose a card from their hand that they think also matches this phrase.  To earn points, players must try to pick out the story-teller's card from the cards of the other players. This is a great game to get the creativity flowing and it is just so pretty to look at!

This is one of my dad's favorites.  He loves gin rummy, so this hits the mark.  It is a card game that combines the set scoring of rummy with the word creation of scrabble.  Each round players compete to create words with an increasing number of cards.  Round 1, you have three cards, round 2, four, and so on and so forth.  Each round you score points based on the numbers each letter is worth.  If you love word games, then this is definitely one to try! 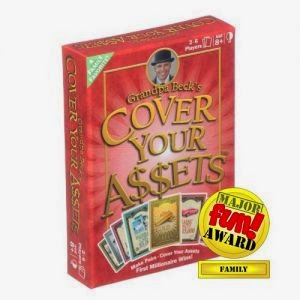 The goal of this game is to become the first millionaire! To do so, you must collect and hide your valuables.  Each player collects pairs of matching assets and places them in a pile in front of themselves. Each time they collect a new asset, it stacks on top protecting the ones below from the greedy hands of the other players.  If a player has a matching card to the top card of your stack, watch out!  That player can try to steal your valuables! Grandparents to kids, casual to competitive gamers will enjoy this fast past, hilarious game.  Oh, and it even comes with a recipe from Grandma Beck inside!! 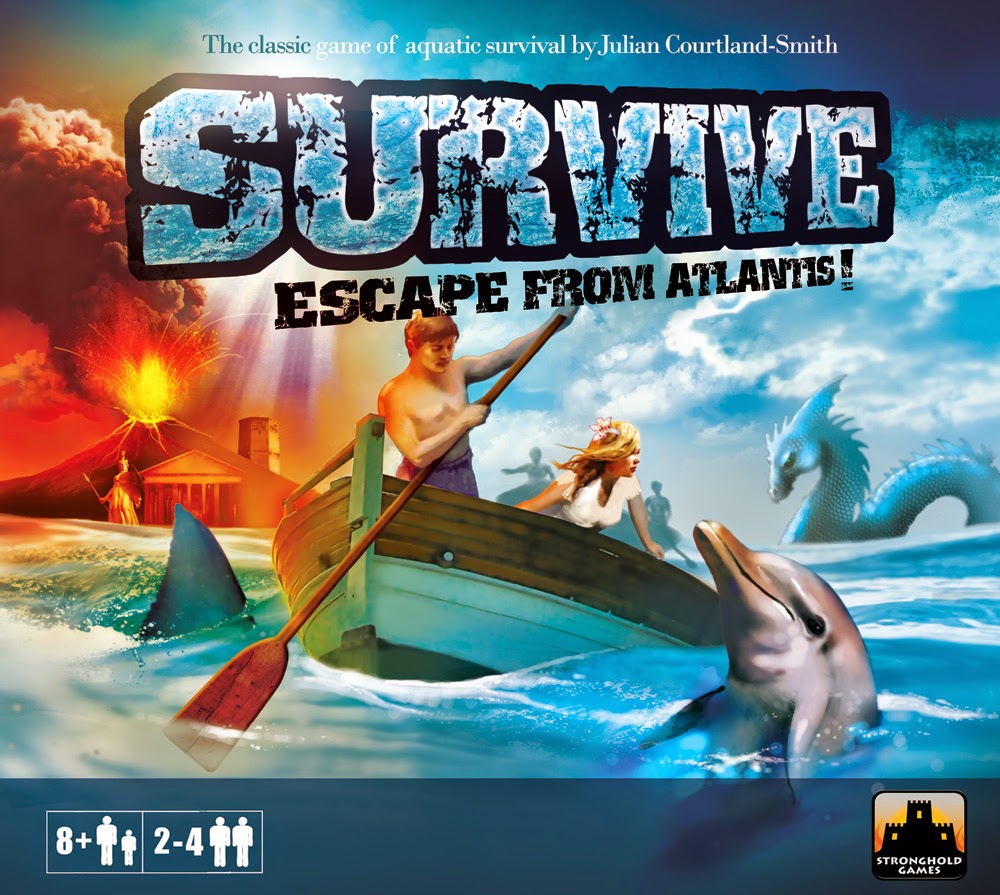 This modular board game is made up of variable height hexes that slowly disappear as the island begins to sink.  The lower areas of the board sink first causing your meeples to seek higher ground.  As the island sinks, sharks, whales, and sea monsters can attack causing all kinds of trouble.  The thick sturdy tiles, quality components and easy to learn rules make this a great family game.  My 4 year old even enjoys jumping in to play a game with us.  He may not get all of the strategy, but he definitely loves to topple boats with the whale or send the sea monster to gobble up an unsuspecting boat full of meeples. 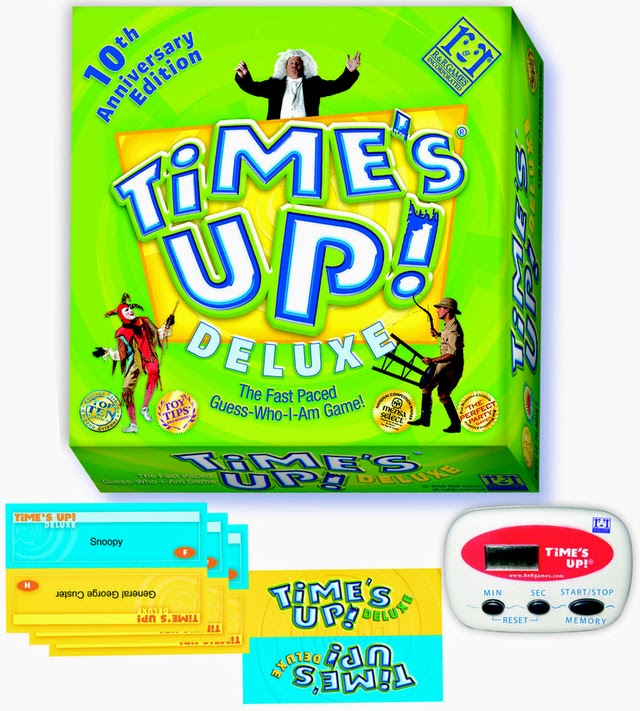 Time's up is similar to charades.  The difference is that in this game, you have three different rounds with varying amounts of speaking you can do.  Round 1: say anything you like accept the word on the the card.   Round 2: You may only say 1 word, and round 3: no words, just motions. This is one of our families all time favorites.  Its a very active game and involves a lot of participation, so if that is not your thing, then this might not be the game for you.  Whenever we pull this one out we are all rolling on the floor laughing before the end of the first round.  There are several versions of the game. Time's Up: Title Recall is by far our favorite version.  This version challenges players to guess the titles of books, films, songs, etc. rather that the famous people from the original version. 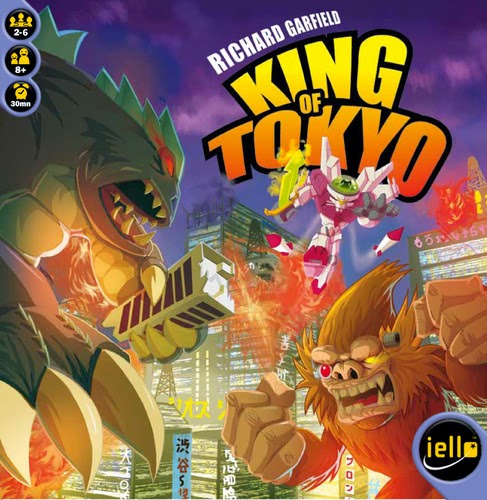 This would be my 4 year old's top pick for favorite family game.  Who doesn't want to play a giant Kaiju taking over Tokyo? King of Tokyo is a simple dice and card game with a lot of luck.  With 6 different monsters to choose from, there is also a lot of variety. What makes this game so fun is the knock'em n' sock'em monster combat. There is a lot of ganging up on one another, but you never feel like you are being picked on for long.  One monster takes over the center of Tokyo and hurts all the others at once -- and every monster outside of Tokyo attacks only the monster inside. With the constant moving of players' monsters in and out of Tokyo it creates a fun and exciting King of the Hill experience for everyone.
This year we will be adding a new addition to this little gem of a game.  King of New York is a brand new  stand alone version of the game that adds new elements and a new feel that we are sure to love too! 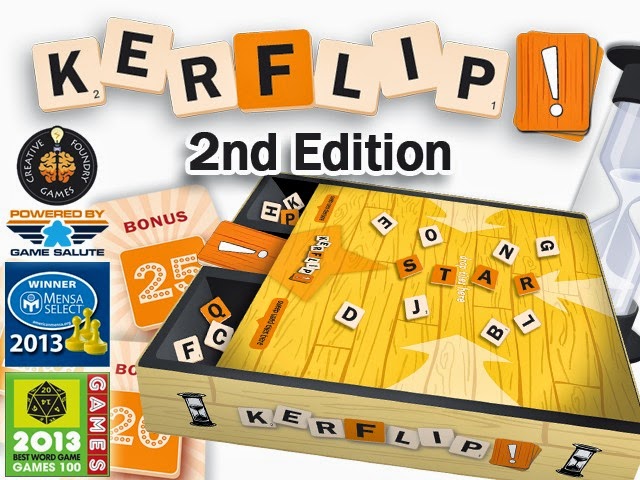 Kerflip! is another fantastic word building game and one that comes with a Mensa award too!  One of my favorite aspects of this game is the genius board design.  The board fits nicely inside the box creating little pockets to slide the letters into during the game.  At the end of the game, you simply flip the box up and all the letters end up neatly in the collection box inside. The game is quick to learn, easy to play for a wide range of ages and skill levels, and it's a blast!  I personally do not fair well in word games versus my husband, but I have been victorious many times with this one.  This game rewards quick thinking and you don't have to rely on knowing obscure words to be victorious.

If you look up the word anomia, you will find it means the loss of the ability to name objects or recognize names.  The game of anomia plays off the fact that our minds are filled with all sorts of random information.  From things to eat and what to watch, to places to visit, our minds are always working.  It's easy to give examples of a breakfast cereals or a types of tree under normal circumstances, but how will you fare under pressure?  The first time I tried this game I was 6 months pregnant with my now 4 year old.  I had such mommy brain at the time, that I crashed and burned marvelously. I had anomia!
The game is simple.  Draw a card and place it face up in front of you.  Does it match any symbols on another player's card? If so, you must quickly come up with an example of the noun on your opponent's card before they can say one for yours.  The quickest person earns the card and play continues to the next player.  That is, unless another symbol matches another player's after the losing players card has been claimed.  This can cause quite the cascade and a raucously good time.

So that's it.  My family's top 10 games for holiday gatherings.  I'd love to here what some of your favorite family games are.  What games make it to your table during the holidays?

Posted by American Geek Mom at 8:17 AM