Martians and Zombies and Bears, Oh My! 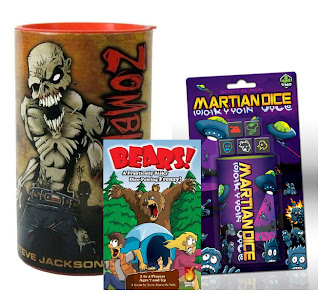 If your looking for a fun and fast way to pass the time between the Turkey and Pumpkin Pie this Thanksgiving, then look no further.  Dan, Brian and I took a look at three quick and easy dice games that are sure to make you giggle with delight.  Whether you are a fan of the Wild Outdoors, Martians, or Zombies, all three of these compact dice games offer simple game play, easy set up, and great flavor.  Just open one up and your ready to play!

Each of these three games offers slightly different game play.  Zombies and Martian dice both offer a turn based game that is risk and reward.  These games are great for engaging in conversations while playing the game.

In Zombie Dice you play as the zombie trying to eat as many brains as possible without getting shot.  The game offers three colors of dice, Green, Yellow, and Red, that represent the risk involved when rolling.  If on your turn you grab a yellow and two green dice, then you have a good chance of surviving the roll and getting brains.  If you grabbed a yellow and two red dice then you may not be so luck.  Each die has footsteps, brains, and gun blasts.  Brains are good, Blasts are bad, and footsteps mean you have to roll it again.

In Martian Dice you play as the Martians trying to collect data from Earth.  You are particularly interested in the Human, Chicken, and Cow species.  On your turn you roll the dice to try and collect each of the three species and avoid being destroyed by tanks.  Unlike Zombie Dice, each of the dice in this game is equal and you roll all dice at the same time.

Bears! is a very different experience.  Though it is packaged very much the same way as the other two, this dice game is much more a group affair.  In Bears! everyone rolls simultaneously and tries to collect sets of dice from the center of the table.  Each player has a set of 5 white dice, and the center of the table has 5 black dice for each player in the game.  Once person roles the black dice (which contain images of bears and tents), then everyone rolls their white dice and races to make sets of black and white dice.  As soon as all the bears or tents have been taken from the middle of the table someone yells BEARS! and you score your sets.  Its fast and fun, and it gets everyone involved!

Personally, I'm a huge fan of having everyone involved and think that Bears! has a slight edge over the others, but that's just me.  Still, all three have a place in our game closet, and I would never say no if someone asked me to play.  So, take your pick, toss it in your bag, and get rolling this Thanksgiving!

Hear which dice game Brian and Dan enjoyed most here...Martians and Zombies and Bears, Oh My!

Posted by American Geek Mom at 1:20 PM No comments:

I Am The Lorax!

Just in case you missed this, The Lorax is coming to a theatre near you!

The Once-ler, enamored by these gorgeous trees, decides to use their beautiful foliage to knit a "Thneed."  You see, a thneed is a thing that all people need!  The thneed is such a success that the Once-ler calls upon his relatives to come help manufacture more thneeds.  The Lorax pleads for him to stop, but he is ignored.

Unfortunately, the Once-ler learns too late what his greed has done to the land, and as the last Truffula tree gets chopped down, the Thneed factories close down and the Once-ler's family departs, leaving the Once-ler alone with the Lorax.

As the Lorax sadly departs through a hole in the smog, he leaves behind a small pile of rocks with the word "UNLESS" inscribed into them.  Unless someone lilke you cares a whole awful lot...

This message has stuck with me throughout the years, making me more conscious of the environment and my impact on it.  It's a message that I hope to pass along to my own son, and I can't think of a better tale than The Lorax.  Thanks you Theo Geisel for such a wonderful story.

The movie is aiming for a March 2, 2012 release to coincide with what would have been the 108th birthday of Seuss.  I hope you join me in celebrating this fantastically fun story written by an amazing storyteller.
Posted by American Geek Mom at 11:19 AM No comments: