On a recent rainy Sunday, Dan and I had the opportunity to break out a prototype copy of Sunrise City.  For those who haven't heard, Sunrise City is a new city building game from Clever Mojo Games that combines tile placement, bidding, and strategic planning.  You are one of the founders of Sunrise City and it is your job to develop the best city possible. 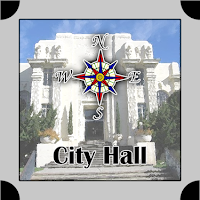 My first impression of the game, as we began to set it up, was that "this looks a lot like Infinite City."  But that view didn't last long! The 60 zone tiles are in fact the same size as the tiles in Infinite City, but there is oh so much more to this game (we'll get to that in a little bit).  The game also comes with 70 Benchmark Tokens, 28 Bid Markers (7 each in 4 different colors), 20 Floor Markers, 16 Role Cards, 60 Building Tiles, 1 City Hall Start Tile, 5 Community Tiles, 1 Protester Meeple, and a Scoreboard.

Although the copy was only a prototype, the pieces were clearly constructed to resemble their final construction.  I was particularly impressed with the heft of the building tiles.  If you have ever played Survive: Escape from Atlantis, the building tiles are about the thickness of the mountain tiles from Survive (about a 1/4 inch thick).  These tiles are the equivalent of two of the zone tiles stuck together, or the shape of a large domino.  What makes these tiles so great is that, because you use them to construct the city, the thickness really helps the city come alive as you begin stacking them up.

Now onto the game play... 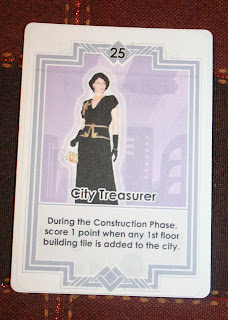 The goal of the game is not to score the most points.  It is to earn the right points by strategically placing buildings that allow you to reach the top of the scoring track and earn the most benchmarks.   There are various activities involved that will earn you points.  If your marker ever lands on the star at the top of your
score track exactly, you earn 2 benchmarks.  Any time you reach the top but overshoot the star, you earn 1 benchmark.

The game is played in 3 rounds. Each round consists of four phases: Preparation, Zoning, Bidding, and Constuction.  Before you begin, everyone drafts 3 roles, one role for each round.  At the start of your preparation phase, you will choose one of those rolls to play.  These rolls provide players with a special ability for the round.  They also help determine the first player in each round (The card with the lowest number will go first). You then draw 4 building tiles and 4 zone tiles. 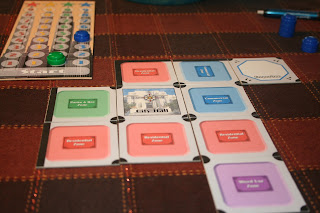 After the preparation phase, you move on to the zoning phase where you begin to plan out the city.  You will take turns placing one of the 4 zone tiles you just drew in the preparation phase.  In order to play a tile you must connect the sidewalks.  It does not matter which way the tile is facing as long as you can walk between tiles.  These tiles will become the base on which you will begin constructing your buildings, so it is important to attach your zone tiles accordingly.  Each tile represents a residential, commercial, industrial, parks & recreation, or mixed use zone.

Once the zoning phase is complete you move onto the bidding phase.  In this phase you are bidding on the zones where you want to place your building tiles.  It is important to remember that you must own at least one connected zone in order to construct a building in a given area, so this is an important step in the game.  Each player has 6 tokens with which to bid.  When the bidding is completed only the top most bid markers count and the rest are redistributed to their owners. 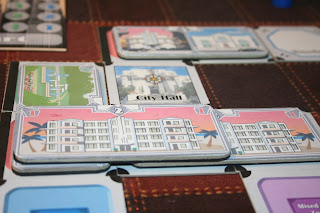 After all bids are placed, you will begin the building phase.  This is where the game visually shines.  Each building tile is made up of two building types that match the zones that were just added.  The tiles are placed on the board connecting the appropriate zone to the type of building.  There are three numbers on each building tile.  The middle number is earned by the player that places the tile and the two outside numbers are earned by whom ever owns the zone on which it is placed.  As you build you can also stack tiles on top of one another building multiple floors after the ground floor.  Players earn bonus points when they build the odd numbered floors. In a four player game, this can get quite impressive as some buildings reach floors of 8 or 9.

And that's it! You complete these phases for three rounds and the player with the most Benchmark Tokens wins!

The only issue I have with the game is that there is a slight disconnect thematically with the roads.  They don't seem to go any where, and while the theme of not being able to build buildings over the roads on the ground floor makes perfect sense, the fact that the roads tend to not connect to one another, seems a little odd.  They usually end up as little circles all over town.  Like a said, not a problem with the mechanics of the game, just a little weird visually.  Regardless, I love the game play and think that it is a great middle of the road strategy game - not too simple, not too complex.  I would place it right between Infinite City and Power Grid. 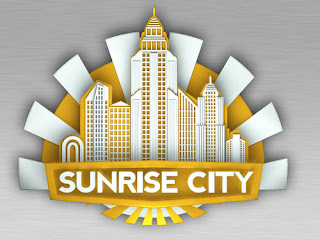 So, if you are a fan of tile placement games, I would definitely recommend giving this one a try.  It is fun, relatively quick, and has enough strategy to keep things interesting.  I can't wait to see the final product, as I am confident that it will have beautiful components to go along with its solid game play.  Also, if you pledge $50 or more to its KickStarter you will get the promo roles and community tiles too.  These will definitely add even more fun to the game, so check it out!
Posted by American Geek Mom at 12:20 PM No comments:

Want to be a real life hero?
Who doesn't?

Children all over the county are dealt some pretty tough cards sometimes, but on October 15, 2011, you can help those kids win.

This is something that recently hit home.  Not long ago, my son, Logan, had his own scary adventures with the hospital.  He suffers from Febrile Seizures and, as you can imagine, it is a terrifying event for both him and his parents.  Without the wonderful doctors and nurses, I would not have known what to do.  I thank God every day for the support and care they have provided to our family.  They made us all feel safe and informed.  This event is my way of giving back, and is a cause near and dear to my heart.

Extra Life, an annual 24-hour video game marathon started by Sarcastic Gamer, raises money to help kids at Children's Miracle Network Hospitals.  It's simple.  You sign up. You get sponsors.  And you play games for 24 hours.  Fun right?  The more people you get to sponsor you, the more money you will earn for your local Children's Hospital.  And that's the best part.  You can pick YOUR local hospital and 100% of your donations go directly to them!

If you can't commit to the full 24 hours (it doesn't have to be a continuous 24 hours), or if you are just not that into games, but you still want to help, search for team GameSalute.com and you can sponsor one of our team members.  I will be raising money again this year and have hopes that we can beat last year's record.

So, join in the fight and help us give kids Extra Life!
Posted by American Geek Mom at 6:51 AM No comments: