5 Kid's Games Parents Will Want to Play Too! 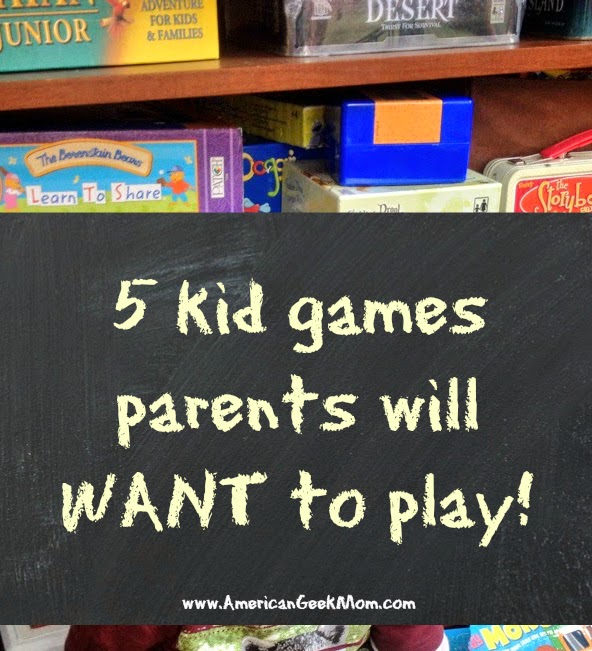 When I was growing up I loved to play games with my younger sister.  I remember lazy afternoons filled with games of Sorry!, The Game of Life, and Uno.  Some days we would even make up our own version of a game and try to teach it to our parents.  Thinking back, we were definitely lucky to have each other because we always had someone to play with.

Besides playing with each other, we also enjoyed watching our parents played games of Trivial Pursuit, Rummy or Monopoly at our holiday gatherings.  Sometimes they would even let us join in as the special dice roller or question asker.  All of these past experiences have helped shaped my love for gaming, which I fully plan to pass down to my children.

Wait!  Who am I kidding, it's in my kids' blood!  Since day 1, my oldest son has been fascinated with our game nights.  Whenever we pulled out a game, he'd sit and watch every move.  Now at age 4, he is a force to be reckoned with at the game table.  In fact, as soon as he gets up most mornings the first thing he'll ask to do is play a game.

Over the last year, his board game collection has grown tremendously.  It has gotten so big, that his collection now rivals ours!  Now let's face it, his (or any kid's) passion to play can sometimes get a little tiring.  Children's games tend to be lacking in the strategy department and rely heavily on a spinner or have a roll and move mechanic.  Not the most exciting games to play over, and over, and OVER again.  Luckily, board games, both adult and kids, have changed a lot since I was young and I wanted to share 5 great games for kids that you'll want to play too!


Hey, That's My Fish!
This adorable little game features cute little penguin figures and lots of nice sturdy hexagonal tiles. You play as a determined penguin who is hungry for his next meal.  players compete for their next meal atop a shrinking Antarctic ice flow.  You see, each time a penguin moves, the tile they were on is collected.  Will you be the one to collect the most fish before the ice flow has you trapped?  Quick learning time, an ever changing game board, and simple mechanics make this a great game for any age, but the ability to make the game as casual or strategic as you need makes it the perfect game for a family of growing gamers.

Catan Junior
If you are a true gamer, you have probably played Settler's of Catan.  Catan Junior is a new spin on the classic game with simplified building rules, child-oriented trading, and a more forgiving robber equivalent know as the "Ghost Captain."  Now I know that sounds like it might be too simplified, but trust me it's not.  There are still plenty of strategic moves to be made throughout the game and without the ability for the game to be bogged down by trade negotiations, I find it much more enjoyable.  Plus its themed out with pirates.  You just can't go wrong!

Castle Panic
This one is great for a family that wants to play as a team.  While there is an option to have an ultimate winner, the game itself is completely cooperative.  Monsters are invading from the nearby forest and you must work together to protect your castle.  Through trading cards, rebuilding walls and working together to hit and slay monsters, you can keep your tower intact.  There is some reading needed for this game, but due to it's cooperative nature, other players can easily help younger ones who may not yet be able to read.

Enchanted Forest
Who doesn't love story tales?  Enchanted forest is a game of hidden treasures.  During the game each player must search the forest for the treasures needed at the king's castle.  You might need to find the glass slipper, or maybe its a dwarves hat.  Each turn you search the forest by rolling 2 dice and moving that number of spaces.  There are many roads throughout the forest and a quick-thinking player will know the best paths to take to reach the trees.  Once you've discovered the treasure requested by the king you must make your way to the castle and announce it's secret location.  The first player to find three treasures for the kings is the victor!  I love to play this game with my son.  It has been wonderful to watch him learn different strategies and see how concentrated and focused he gets.  Memory is key in this game and the variable board keeps the game fresh play after play.

Whoowasit?
This is another great cooperative game.  By taking turns and gathering clues found in various rooms in a castle players work as a group to solve the mystery of who stole the magical ring from the king. The ring protects the kingdom from the evil wizard. The castle animals witnessed the act of thievery in the night and can give the children clues (cause only children can understand animals). If all players together can solve the mystery before time runs out, everyone wins. If the players can't, everyone loses.  The game comes with an electronic treasure chest that gives you clues throughout the game.  The game also has a time limit which prevents it from dragging on and offers some suspense each time the fairy announces the time.  Several game level options add more variety to the game as well.  Of all the games listed here, this probably has the most difficult rules.  The first game may be a bit slow, but after your initial play the kids should be able to play on their own.

All of these games have had a dedicated spot on our game shelf and I can see them lasting there for several years to come.  What games do you not mind playing over and over with the kids?  I'd love to hear the games you find fun and challenging with your kids.