When I became a parent I didn't realize I was also signing up to be a professional wrestler.  Dressing and diapering my son in the morning can sometimes feel like a grappling match.  For instance...

I move in to grab hold of my target. He is a small target, so I suffer a -4 penalty.  I strike with an attack of opportunity, which catches him off guard.  He is mine!

The battle is on.  As quickly as I can, I get him undressed.  Next comes the diaper.  I distract him with a tube of diaper cream, which gives me enough time to get him clean before he wiggles away.  It is not uncommon to see Logan running naked through the living room squealing with delight before I can grab him again and complete the task.  It's not that he wants to be naked (well maybe a little), but that he wants to do it himself.  In many cases he takes his pants along with him and tries desperately to put them on his head!  He's seen me dress him thousands of times. Now he wants to give it a go.

You may think that because children are a part of the process of getting dressed every morning that you can hand them a pair of pants and they'll pull them right without much thought. That is not necessarily the case.  Most of the time a few lessons are needed to get them on the right path.  It dawned on me that I had the perfect solution for this challenge packed away upstairs. 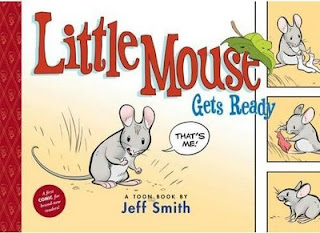 Not long before Logan was born, I was given a cute little book called Little Mouse Gets Ready.  I had only recently been introduced to the Bone comic book series, and did not know much about Jeff Smith's work.  I was pleasantly surprised to learn about this little gem.  I mean, It's a comic book that is engaging to a toddler!  Talk about starting him early.

Truth be told, comics are a great way to get children interested in reading.  Jeff Smith chose wisely when he decided to use a landscape format.  Several pages are divided up into two panels, which makes it an easy read for youngsters.  Because the story has equal parts pictures and text, it has the ability to hold a child's attention longer than blocks of print.  An added benefit is that comics have been proven to be a great way to expand a child's vocabulary because they provide context to words the child wouldn't normally be exposed to.  Logan's not quite ready to read yet, but I know this will be great when he is.  Until then, he can follow along with me.  The story makes a serious effort of showing how one gets dressed every day.  From buttons and Velcro to snaps and where the tag on underwear goes, this story is an  accessible guide for my son to practice and learn.   And the best part...It's fun to read!

Do you have children who are learning to dress themselves?  What sort of crazy outfits have they put together on their journey to independence?

The following are some other young reader comics you may want to check out -
Jack and the Box by Art Spiegelman
Silly Lilly and the Four Seasons by Agnes Rosenstiehl
Benny and Penny in Just Pretend by Geoffrey Hayes
Owly by Andy Runton
Posted by American Geek Mom at 1:28 PM