Castle the Graphic Novel and the Growth of Online TV

Last night, after we put our son to bed, my husband and I sat down to catch up on a little TV.  We didn't turn on our Direct TV or Cable.  We didn't even load up our TiVo.  Instead, we booted up our laptop and checked our Hulu queue. 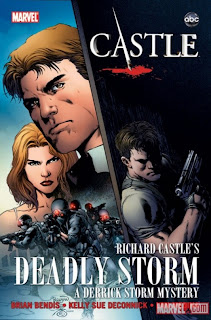 Excited to see the new Castle available, we clicked on the episode and began our evening ritual.  I had heard news that Nathan Fillion was going to show artwork for a new graphic novel from Marvel entitled Castle: Richard Castle’s Deadly Storm.  I couldn't wait to see it.  The reveal happened in the opening moments of the episode, but was quickly overshadowed by a very suspenseful episode.

I have been a fan of Castle since its debut, and can't wait to see what will happen with this new graphic novel.  I think what makes me the most excited is that it will be accessible to a larger audience.  It's something I can suggest to my mom (she loves mysteries and detective stories), and will draw new fans to the comics industry because of its wider appeal.

If you recall I also mentioned that we did not turn on the cable to watch this episode.  In fact, in our house, we have the most basic of basic cable just to get the deal with Comcast for our internet.  And we are not the only ones.

Gone are the days of TGIF and Full House.  Families no longer gather on the couch to watch TV at eight PM.  We no longer want to know what night shows are on, we want to know where we can watch it online?  Our lives are busier and our priorities have shifted.  In this digital age, we flock towards what's faster and more convenient.  We want media on demand and we want it without interruption.   Hulu, Netflix, Amazon Instant Video, and iTunes are fast becoming the new way to watch TV.  On top of that Clicker.com is becoming the TV guide of the internet, and provides users with links to their desired TV shows all in one place.

Let’s take a look at what's out there.
Hulu is a service that allows you to stream current episodes as well as some movies and older shows for free.  You can subscribe to shows which will automatically appear in your queue anywhere from a few hours to a few days after it airs on TV.  Most shows have a limited viewing window, so you need to stay up to date.  Hulu has also added Hulu Plus for $7.99 which gives you unlimited viewing of past episodes and access to a wider variety of movies and shows.  The down side to both of these is that they contain some ads.

Netflix, primarily known for DVDs, now has a watch instantly service that is just as geared toward watching online as it is to renting DVDs.  It currently offers unlimited online viewing for $7.99 a month, but is a less up-to-the-minute episode player.  On the up side, it is great for watching movies and previous seasons of TV shows you missed the first-time around.

The new kid on the block is Amazon Instant Video, which offers a catalog of more than 90,000 movies and TV shows.  Most of the rentals cost between 99 cents and $3.99, but you can also rent TV shows by the season.  If you are an Amazon Prime member, you have access to 5,000 videos in their catalog included with your $79 annual membership.  This one seems to be most worth it for those who are already members.

And finally, there's Apple’s iTunes.  You can stream episodes of current TV shows as early as a day after they air for around 99 cents an episode or buy a season pass at a cheaper rate.  Both Amazon and iTunes offer movies the same day as the DVD release.

Below is a handy chart I discovered on Clicker which gives you the breakdown.

There are unfortunately still a few shows that require a live feed, namely sports.  But even sites like MLB.tv for baseball and ESPN 3 are offering some form of live streaming.  The truth is, none of these sites have it perfect, and it all depends on your watching needs.  So pick what works for you.  There is no denying that this is the way of the future, but who will come out on top?
Posted by American Geek Mom at 7:54 AM