Are you Ready for The Hunger Games?

After finally getting the book into my hands about two weeks ago I found that I could not put it down.  Despite having a toddler who gets up at 6 AM and a gaming group that on average plays until 11:30 PM - 12 AM, I could not help myself but to keep reading long into the night.  Most nights ended with me battling to keep my eyes open before giving up around the 2:30 AM mark!  I am nearing the finish of the trilogy now and can't wait to see how it has been adapted for screen.  The Hunger Games finally hits theaters this Friday, March 23rd (My Son's Birthday!)  Sorry Logan, your party is on Sunday, Momma's got a date with Daddy and The Hunger Games ;0) To be fair, my birthday is on Monday. 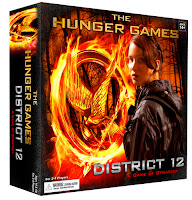 Aside from the Movie release, two new games have hit your friendly local game store.  Wizkids recently released a new board game where players can try their luck in District 12.  The Hunger Games: District 12 brings players into the daily lives of its citizens.  Can you acquire food, clothing, medicine, and fuel to avoid taking Tesserae?  The Reaping is approaching: Who will be selected as Tribute for the Hunger Games?

First Impressions:
-Fast easy game play (10 page rule Book!)
-Stripped down mechanics make it approachable but might not have enough meat for some
-Apparently everyone is Katniss in this game despite the rules reading like you are any citizen of District 12.  Each player gets a token that is the same picture of Katniss, only its a different color.  This seems a bit odd and out of place.
-The game has an elimination mechanic that some might find unpleasant. The Glass Ball, while very thematic, could very well take out the player who is winning the game. At the end of the game one of the names is drawn to symbolize the Reaping and unfortunately anyone could lose even without adding any Tesserae.
-It's a solid game with decent components, but didn't make me feel as desperate as I imagine the citizens of district 12 to be.

Jabberjay has also recently been released by wizkids and is a traitor game much like Werewolf or The Resistance.   It plays between 5-12 players (though there is a coop mode for 4 or less) and has the same split into two teams mechanic as The Resistace. One is a smaller group of District citizens who know each other’s identity, and the second is a larger one of Capitol citizens who don’t. Our group has yet to get this to the table, but I will be sure to point you to our podcast review as soon as we do. 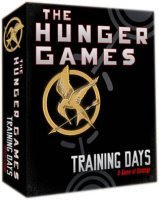 Back in 2012, Wizkids released The Hunger Games: Training Days making three titles in all. The question now becomes will these two titles have the same fate as Training Days, or will they prove to be solid game closet contenders?

And one final thing...The one thing our group immediately noticed with all of these games is that none of them capture the struggle in the arena.  Instead they focus on the training (Training Days), surviving daily life in district 12 (District 12) and the rebellion (Jabberjay).  Is there an Arena game in the future?  We hope so!